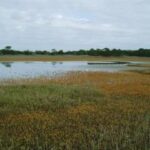 Preserved: Forming the eastern-most tip of Kiawah, Little Bear Island is bordered by the Atlantic Ocean and the Stono Inlet and is connected to The Ocean Course at Kiawah Island Golf Resort by a small strip of land.

Conservation Value: Described by a leading conservation easement attorney as “one of the most important conservation easements across the country,” the island hosts a wide variety resident and migratory wildlife species. It’s beaches welcome loggerhead turtles that arrive in the spring and summer to nest and dolphins are often seen in Penny’s Creek on the west side of the island. The tidal salt marsh and salt shrub thicket vegetation includes sea ox-eye, glasswort, marsh-elder, sea lavender and seaside goldenrod. Areas that receive salt water daily present a mosaic of black needle rush, saltwort and sea lavender. Hundreds of fiddler crabs can be seen scurrying around in the saltwort. The tidal salt flats are traversed by trails used by the many deer that inhabit the island. Footprints of bobcat and raccoon are not uncommon and red-winged blackbirds can be seen frequently flying in and out of the cordgrass. Plant succession on a barrier island away from the influence of salt spray will ultimately result in the development of maritime forests or maritime shrub thickets. In the maritime forest habitat canopy trees are abundant and include live oak, sand oak, red bay, yaupon holly, red cedar, wax myrtle, hackberry, winged sumac and cabbage palmetto. An occasional loblolly pine can also be found and several species of smilax, including dune greenbrier, dominate the habitat. Other common vines include Virginia creeper and muscadine grape. Atlantic maritime dry grassland plant communities are found on the sand dunes along the Stono River side of Little Bear Island. In this grassland habitat waves of sea oats are flanked by masses of camphorweed, prickly-pear cactus and fiddle-leaf morning glory. Grasses include salthay, seaside panicum, coastal dropseed and sweetgrass. Plants with onerous names such as devil’s joint, sandbur, Spanish bayonet and bear grass also occur in this habitat.