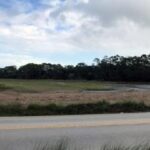 Conservation Value: This 5-acre upland “finger,” that extends out into the marsh, is situated between Mingo South and “mainland” Kiawah Island. 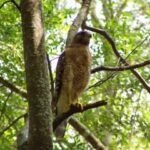 Conservation Value: The Maritime Forest Reserve and Nature Trail provides a unique outdoor learning experience. This open-air classroom, located near the entrance to the Kiawah community, features a variety of maritime forest plants. Informative signs located along the trail highlight plant details such as special adaptations and significance to wildlife habitat. Maritime forests, typically found on barrier islands like Kiawah, provide a protective buffer between the mainland and the sea. In addition to island stabilization, these coastal forests also perform other environmental functions such as supporting wildlife habitat, soil production, and nutrient conservation. Maritime forests create a natural cooling effect through their shade and act as a buffer against noise. The plant life within the maritime forest habitat is especially tolerant of the rough salt spray, sun, and wind conditions that exist on a barrier island. The wide variety of native plants found along the trail are not only beautiful, but are well suited to Kiawah’s growing conditions and help sustain wildlife on Kiawah Island. Bobcats, foxes, deer, rabbits and raccoons are some of the many animals which use the forest as a sheltered resting place and source of food. 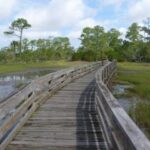 Conservation Value: Marsh Island Park is a coastal hammock island that provides a substantial area of natural habitat for a variety of wildlife species. Research indicates that these island habitats are being increasingly utilized by a number of migratory bird species, including painted buntings. The Marsh Island Park property is also an important daytime resting area and nighttime hunting area for bobcats, and was utilized by an adult female and her kittens in 2007. 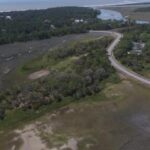 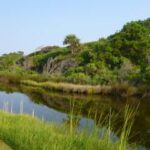 Location: Adjacent to the Ocean Course, between Ibis Pond and Willet Pond 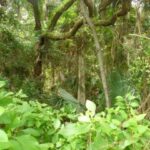 Conservation Value: The Osprey Point Nature Area property has been regularly used by bobcats for daytime resting cover and is also a very important travel corridor (as indicated by Bobcat GPS Project data, 2007-current). The property is across Flyway Drive from the Ocean Palms subdivision – an area that was associated with one of the Island’s most important bobcat denning habitats prior to its development. The Osprey Point Nature Area property is large enough to potentially provide an alternative den site in the future. 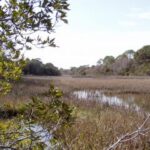 Conservation Value: Salt shrub thickets are found on slightly elevated areas of Kiawah Island, adjacent to tidal salt marsh. They are only occasionally flooded by high tides and frequently serve as a transition area between the marsh and forested uplands. These thickets, which often occur as bands or patches of salt tolerant rushes, grasses and shrubs, are heavily used by bobcats as den sites and for resting cover. They are also utilized by a myriad of birds, including several migratory species, including the painted bunting. Plant species that characterize the salt shrub thicket habitat type include black needlerush, marsh elder, groundseltree and red cedar. 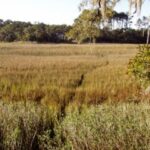 Conservation Value: The marsh adjacent to this hummock island is covered with pluff mud and typical marsh vegetation, including smooth cordgrass, saltwort, broom sedge, marsh elder, and sea ox-eye daisy. There are also abundant shells of mussels and marsh periwinkle. Though the island is only a foot or two higher than the surrounding marsh, its vegetation is that of a mature maritime forest with abundant live oak, loblolly pine, yaupon holly, red cedar, and wax myrtle. Other vegetation on the island includes sweet grass, yucca, broom sedge, coral bean, prickly pear, a variety of catbriers (smilax species), and cabbage palmetto. The oaks are surprisingly old and well developed, with some up to two feet in diameter. The island harbors a variety of birdlife including typical marsh birds: snowy egret, great egret, great blue heron, cormorants, and hooded mergansers. But the most interesting is the abundance of woodpeckers, including the usual red-bellied woodpecker, yellow-bellied sapsuckers and flickers, and the less common (on Kiawah Island) red headed woodpecker. In addition to these birds, the island also provides habitat for towhee, Carolina wren, yellow-rumped warblers, white-throated sparrow, mockingbird, tufted titmouse, and several hawks, including osprey and northern harriers. The island is used as a secluded nesting site for many of these species. Other wildlife on the island includes deer, raccoons, opossums, and other small animals. The island is used by a variety of species as a sanctuary where animals can live undisturbed by humankind. 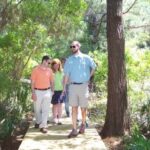 Conservation Value: This easement preserves one of Kiawah’s few freshwater wetlands. In addition, the property is a haven for wildlife and has been identified through Bobcat GPS Research as critical bobcat habitat. In 2007, a GPS-collared female bobcat and kittens were seen several times on the property, suggesting that the property was perhaps being used as a denning area. A paved path and boardwalk bisect the property offering Island owners and guests an interesting walk through the middle of this unique freshwater wetland habitat and adjacent maritime forest.

Conservation Value: In addition to the conservation easements it holds on larger properties, the Kiawah Conservancy owns the following properties.

These undeveloped home sites provide key habitat areas for wildlife resting, nesting, cover and movement. Although the majority of the habitat associated with these preserved parcels can be characterized as maritime forest, a handful also have salt shrub thicket habitats contiguous to tidal wetlands and or associated “edge” habitats adjacent to brackish ponds.

These areas of mature maritime forest, which often exhibit substantial understory habitat, have great ecological value. Natural areas, where they exist across the Island, are extremely important to wildlife. The preservation of these properties maintains important corridors and limits small-scale habitat fragmentation in developed areas. Additionally, many of the lots owned by the Conservancy adjoin neighboring green spaces, buffer properties or existing natural features, allowing them to add acreage to existing, wildlife-friendly, habitat areas.

Though small, these habitat pockets are frequently used by a variety of wildlife. In addition to regular bobcat use on many of these properties, as observed through ongoing Bobcat GPS Research, these areas of lightly managed natural habitat provide important nesting space for a variety of resident and migratory songbird species.