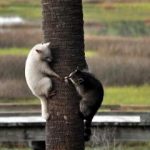 Gray or brown racoons with black facial masks and ringed tails are abundant on Kiawah Island. They usually build dens in hollow trees and are nocturnal, meaning they are active at night. These 10 to 20 pound curious and intelligent animals are quite social, and often travel around the Island with other racoons. Although they often wash their food before eating it, they won’t pass up a tasty treat if water isn’t available. Some of their favorite foods include acorns, blackberries, grapes, insects, crayfish, lizards, and eggs, and are sometimes found scavenging in garbage cans. The dexterity in their human-like hands allow them to turn doorknobs and jars, or even untie knots! On Kiawah, the breeding season is from February to June, with up to 5 kits (baby racoons) born 63 days after conception. 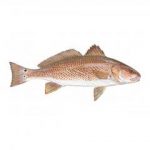 Perhaps the most popular game fish, the Red Drum, is both fun to catch and excellent to eat.  Its long body is distinguished by one or more large black dots just before the tail fin. It varies widely in size from one pound to over fifty pounds.  The large “bull” redfish, typically caught in fall season, is a real challenge to reel in! You can find Red Drum in brackish and saltwater ponds, rivers, creeks, and even the ocean. 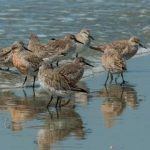 One of the most treasured shorebirds to Kiawah residents is the spring-time arrival of the Red Knots, a 9- to 10-inch tall, cinnamon colored Sandpiper. Although precise identification of Sandpiper species can be challenging, the tell-tale sign for the Red Knots is in the way they arrive on Kiawah, in large flocks. Red Knots have relatively small heads, tapered beaks, and chunky bodies.  These highly endangered birds summer in the Canadian Arctic Tundra and migrate to the Southern tip of South America for winter, over a 9,000-mile one-way trip. This is one of the longest migration distances of any animal on Earth. Kiawah provides a quiet, safe spot for the birds to rest up and refuel as they continue on their adventurous journey back and forth each year.

The population of Red Knots declined about 75% in the 1980’s due to the overharvesting of their primary food source, horseshoe crab eggs in the Delaware Bay.  This is a critically sensitive area since 90% of the red knot population stopover in Delaware Bay in early May on their journey north.  As awareness about the plight of the Red Knots grew, steps were taken to fix this problem, mostly by protecting spawning horseshoe crabs and habitat. If you’re visiting Kiawah between March and May, you might find these birds sticking their beaks in the sand searching for horseshoe crab eggs and little clams. Enjoy watching them as you respect their space allowing them to find the rest and nourishment they need for their incredible journey. 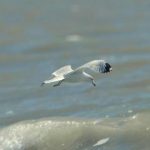 Ring-billed gulls are medium sized birds with gray backs and white heads. As one would imagine, a ring-billed gull has a black ring on its yellow bill. However, one of the most distinguishing features of this bird is its distinct white spots on jet black wing tips. The ring-billed gull is reportedly the most common gull in North America. Although they are present year-round at Kiawah’s beach and ponds, the are most common in the winter. 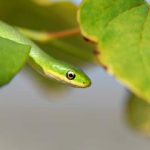 Rough Green Snakes are long (up to 32 inches) and slender with bright green scales and a yellow or whitish belly.  They spend much of their time climbing in vegetation. Their bright green color easily distinguishes them from other snakes in our area. They can be found in a variety of habitats but are most common in open forests and edge habitats. Rough green snakes are non-venomous and enjoy hanging out near or over water where they can easily find their favorite prey: insects, spiders, and other invertebrates. When encountered, they often freeze, relying on their coloration for camouflage. 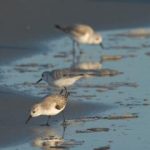 Look for flocks of Sanderlings, plump little birds about seven inches tall, scurrying across the shore on their tiny legs. Sanderlings are constantly in motion, running back and forth along the shore after receding waves foraging for horseshoe crab eggs, worms, small crustaceans, and insects on the beach. Notice their black beaks and black legs and feet with a light gray feathered upper body and white lower body. They migrate from their breeding grounds in the Arctic Tundra to Kiawah. Although they are very common on Kiawah’s beach year-round. Like many shorebirds, their numbers have been declining over the years. 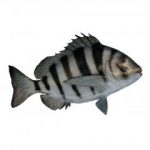 Sheepshead, a fish marked by distinct black vertical stripes, is challenging to catch because they tend to nibble rather than swallow their prey. Sheepshead have unusual, broad, almost human-like teeth in the front of its mouth for chewing hard shelled animals like barnacle and crabs.  They grow up to about 20 pounds and live almost exclusively near pilings. Look for them in creeks near docks.  Sheepshead love to chow down on fiddler crabs, which are more abundant in brackish waters. 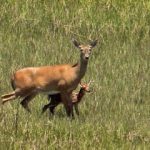 White-tailed deer are very adaptable creatures, equally at home in forests and fields as well as suburban neighborhoods.  There are approximately 500 deer on Kiawah Island and they can be seen on all parts of the Island, mainly during the hours between dusk and dawn.

Kiawah Island’s white-tailed deer are the same species as deer in the Northeast and Midwest, although they are smaller in size.  Their smaller size allows them to cope better with the warm climate of the Southeastern coast.  During the summer, deer are slightly reddish in color; by mid-October they will have attained their winter coat, which is thicker, darker, and gray in color.  One of their most distinguishable characteristics is the white underside of their tail.  Deer raise their tails when they are alarmed as a warning to other nearby deer.  You’ll be sure to notice it if you startle deer on your walks around the Island.

The wood stork is the only breeding stork in the United States.  They are often seen circling high in the air over the marsh or feeding on shallow marsh flats. Wood storks are tactile feeders, probing shallow water habitats for a variety of aquatic animals. 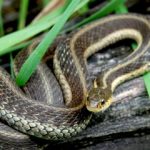 Yellow rat snakes are typically three to six feet in length and yellowish-brown in color with four black stripes running the length of their body. Their belly is whitish in color near the head and becomes checkered or mottled toward the tail. Rat snakes occupy a wide variety of habitats including hardwood forests, river floodplains, and swamp margins.  Rat snakes are non-venomous constrictors, primarily eating mice, rats, squirrels, birds, and bird eggs. Juveniles eat small frogs, lizards, and small rodents. Rat snakes are constrictors, and very good climbers. They are common to all parts of Kiawah Island and are often found in trees.