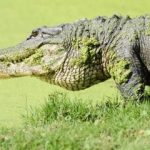 Kiawah Island is home to a very healthy population of American alligators.  They can be seen in almost all of the 183 brackish and freshwater ponds which are interspersed throughout the Island. Most of the alligators seen on Kiawah will be between 3-8 feet in length, though larger alligators up to 11 feet are present in some areas of the Island.

In January of 2015, the Kiawah Conservancy announced the undertaking of a new Alligator Study lead by Dr. Louis Guillette. Dr. Guillette is the director of Marine Biomedicine and Environmental Sciences Center and a professor of Obstetrics and Gynecology at MUSC. He is also the endowed chair of Marine Genomics for the South Carolina Center of Economic Excellence.

By observing local alligators as “sentinel species,” Dr. Guillette’s research focuses on how chemicals and contaminants interact with the environment in ways that impact human health. His work often has him out in the field, whether doing research on crocodiles in South Africa or local alligators. In his wildlife biology research for the past 20 years, Dr. Guillette has found links between environmental contaminants and infertility and reproductive issues in alligator populations from Florida to South Carolina.

The addition of Kiawah Island as a study site in his long-term alligator research effort, will provide critical information on how these long-lived reptiles continue to adapt to rapidly changing environments along the southeastern coastal plain. In addition, information ascertained from the study, along with a better understanding of current and changing conditions, will better equip the Kiawah Conservancy in it’s habitat and wildlife preservation efforts.

Currently the researchers have captured and studied more than 26 alligators, taking tissue, blood and urine samples from each. These samples will be analyzed for a variety of toxicological data. Trapping is anticipated to continue throughout the summer with a total of 50 alligators being sampled this year. Researchers are eager to discuss their work, so if you see them while your enjoying a leisurely stroll, don’t hesitate to stop and talk with them. They’re happy to answer any questions you may have.  You’re sure to enjoy the experience and learn some new and interesting facts about our modern dinosaurs. Stay tuned for more updates and information on this exciting study. 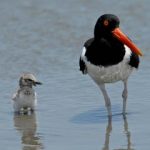 Oystercatchers, shy migratory birds on Kiawah, are easy to identify because of their black heads and distinctive orange eyes and long red beaks. Look for these fairly large birds on the eastern and western ends of the beach, from 17 to 21 inches tall, with brownish-black feathers on their upper bodies, and white feathers on their underside. Oystercatchers use their sharp, needle-like beaks to stab at unsuspecting bivalves–oysters, clams, and mussels that have partially opened their shells. These birds try to disable the muscle that is used to close the shell before the shellfish snaps it closed. Because oystercatchers diet primarily on shellfish, they walk more than they fly. 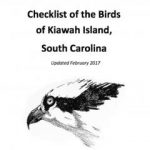 Kiawah Island is home to more than 200 species of birds, ranging in size from the tiny ruby-throated hummingbird all the way up to the bald eagle. Check out this checklist of the birds of Kiawah Island published buy the Town of Kiawah.

Please report any rare or unusual sightings to the Town of Kiawah Island wildlife biologists at 843-768-9166 or agiven@kiawahisland.org. 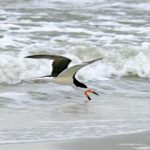 Black Skimmers are 15- to 20-inch birds with long black beaks with a red base, black feathered tops, and white bottoms. They can be seen flying low to the water with their beaks open, searching for unsuspecting fish to scoop up. Although you may see black skimmers during the day, they’re highly successful hunters at night, in low light conditions. These graceful birds that glide across the water are quite social, nesting in groups with other black skimmers, and even laughing gulls and terns. Look for them year-round at the beach, ponds, and tidal creeks on Kiawah. 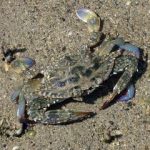 The blue crab, the king of common edible coastal crabs, has a green body and blue legs and claws. His eyes are on the ends of movable stalks allowing for 360-degree vision. The blue crab has five pairs of legs, including three for walking, one for swimming, and one that is actually a pincer. Stand on the edge of the shore, peer down into the water, and look for blue crabs walking along the ocean floor. The gender of a blue crab can be determined by looking at it’s underside. Males have a rocket ship pattern while females have an upside down U-shaped design.

Female blue crabs live in brackish water but travel closer to the saltier ocean to release their eggs in open water.  Although they lay between two and eight million eggs, only one or two typically survive to adulthood. Blue crabs scavenge on dead animals and also eat small fish, shrimp, and other crabs, and are an important food source for birds and numerous species of fish.  Humans find them pretty tasty too! 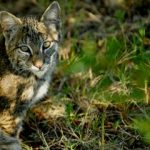 Kiawah Island is home to a healthy, stable population of bobcats. They can be seen in all parts of the Island, typically during the hours from dusk to dawn. Bobcats pose no threat to humans and serve a vital role in managing populations of rats, mice, and deer on the Island. Because of their vital importance to the Island’s ecosystem, many research projects have been conducted to better understand their habitat needs and requirements.

Learn more about the Town of Kiawah Island and Kiawah Conservancy’s Bobcat GPS Research at http://www.wildlifeatkiawah.com/2014bobcats.html 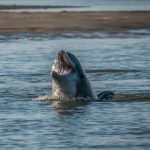 Kiawah’s gray-silver bottlenose dolphin pods don’t migrate and can be seen off the shores of Kiawah every month of the year. If you look out into the ocean from the beach, you may be able to spot a 6- to 10-foot long dolphin, weighing about 500 pounds, swimming relatively close and parallel to the shore. The most remarkable dolphin encounters you can easily observe while on the beach occur at the western end of the Island, at Captain Sam’s Spit, the inlet of the Kiawah River. It is at the Spit that these highly intelligent and social animals work together to engage in strandfeeding, a community fishing effort Lowcountry dolphins teach to each other, to herd up fish.

Strandfeeding often occurs in the morning at low tide. A group of dolphins will circle a school of fish, usually mullet, and herd them closer and closer to the sloped river shore. You might notice a leader dolphin, pop his head up, checking to make certain the shore is open and clear. If it is, he’ll signal the other dolphins with clicks or whistles. Together, the dolphins create a strong wave tossing the fish up on the sandy shore. Dolphins throw themselves onto the beach as well, behind the fish, catching and consuming as many fish as they can before wiggling themselves safely back into the water. Interestingly, they always come ashore on their right sides.

Strandfeeding is a learned behavior dolphins teach to each other, and is exclusive to dolphins of the South Carolina and Georgia coasts. Strandfeeding is risky for dolphins. If they push themselves up too far on the shore, they can strand themselves on the beach. If the beach doesn’t look safe, dolphins will stop their pursuit and consider another attempt in a safer area.

For your best chance to see dolphins, walk or bike down to Captain Sam’s Spit at the western end of Kiawah early in the morning at low tide. Quietly stand still about 50 feet from the shore to give the dolphins plenty of room. During the summer, pelicans will often scope out the area and patiently wait for extra fish thrown just out of the reach of the dolphins.

Strandfeeding also occurs at low tide at the exposed islands in the Kiawah River and in Bass Creek at the eastern end of the Island.  Getting to these locations, however, generally requires having access to a boat. Seeing dolphins work together isn’t something that is observed every day, but it is an astonishing sight to behold!

If you see a dolphin or other marine animal, dead or alive, on the beach, pleasec notify Town of Kiawah Island (843-768-9166) immediately. 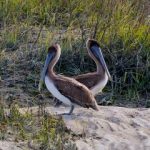 Brown pelicans are large shorebirds with massive pouched bills. Adult pelicans are grayish-brown with white heads and necks. During the breeding season, the pelicans’ necks turn a rich brown.

At the beach, brown pelicans can be spotted flying over the ocean and dunes in lines or in “V shaped” formations. From high up in the sky, a pelican will slowly turn and then plunge down towards the water to grab an unsuspecting fish in its large beak and expandable neck pouch. Brown pelicans can travel up to 40 miles per hour and live year round on Kiawah. At Captain Sam’s Spit on Kiawah, brown pelicans can be observed patiently waiting on the shore’s edge, ready to grab extra fish flying through the air from dolphin strandfeeding.

Brown pelicans made a remarkable recovery from near extinction during 1950’s to 70’s after the 1972 banning of DDT in the United States. This is an excellent example of how research and awareness can work together to educate the public, promote change, and protect wildlife. If you think about dinosaurs as you watch the brown pelicans on the beach, it may be because pelicans have changed very little during the past 40 million years. 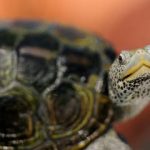 The diamondback terrapin is Kiawah’s only brackish water turtle. Diamondback terrapins can be found throughout the creeks and rivers surrounding Kiawah Island. Most of the time all you will see is a head sticking up above the water, though terrapins can also be seen sunning on creek banks and females will venture on land in the summer to lay eggs.These terrapins grow are usually between five to eight inches long (females are twice as big as males) and weigh between 0.5 lbs and 1.5 lbs. They get their name from the striking diamond-shaped pattern on their top shell. They are typically light brown or gray on top and yellow to olive on the bottom. Their whitish-gray skin is covered with unique black spots and wavy markings.

In the late 1800’s and early 1900’s, terrapins were considered a culinary delicacy and terrapin soup was a common menu item in most fine restaurants along the Atlantic coast.  For this reason, terrapin populations suffered a significant decline due to over-harvesting.  As the taste for terrapin soup diminished, terrapin populations were able to rebound but they continue to face significant threats at the present time.  One of the biggest threats to our local terrapin population is the accidental death of terrapins in commercial and recreational crab traps. Because of this threat a device, known as a Bycatch Reduction Device (BRD), can be installed into the openings of crab traps to dramatically decrease the likelihood of terrapins being accidentally captured and drowned. Property owners and visitors alike are encouraged to utilize BRDs. If you already own a crab trap, you can take it to the Nature Center at Night Heron Park to be outfitted free of charge with a BRD. If you are planning to purchase a crab trap, ask your vendor if they have traps already fitted with BRDs.

Kiawah Island has been a focal point for terrapin research. Researchers have been capturing and marking terrapins in Kiawah creeks since 1984. 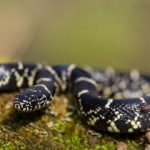 Eastern kingsnakes are non-venomous constrictors. They can grow up to 5 feet long and have shiny-black, smooth-scales with white or yellow bands that cross their back and connect along their sides in a chain link pattern. Because of this pattern they are sometimes referred to as the chain kingsnake. Eastern kingsnakes are found in many habitats including forests, swamps, hammocks, tidal wetlands, and even farmlands and suburban areas. They consume a variety of prey including lizards, rodents, birds, and even other snakes. Kingsnakes are resistant to the venom of pit-vipers and have been know eat copperheads, cottonmouths, and rattlesnakes.